dear Devotees
PAMHO
AGTSP
Many devotees may have read parts of Aindra Prabhus book or the whole book.Yes Ragamarg is the goal of our bhakti and even bookdistribution is not as much a goal as this is,this is the point he is making.However there is no ragamarg for most, why is that? They simply do not have the qualifikations of unselfish devotional service.Unselfish devotional service is developed by distributing Srila Prabhupadas books because this is one of the most essential…

All glories to Srila Prabhupada
I previously posted 108 Names of Lord Rama and some nectar about Lord Rama at http://www.dandavats.com/?p=3134

CC Madhya 15.32: On the day celebrating the conquest of Lańkā — a day known as Vijayā-daśamī — Śrī Caitanya Mahāprabhu dressed up all His devotees as monkey soldiers 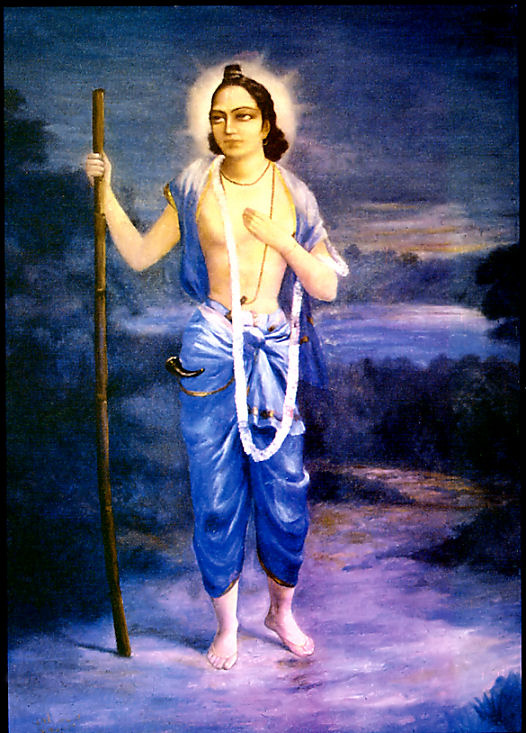 “I offer my humble obeisances to the transcendental moon Lord Shrimaan Nityaananda Prabhu.”

This is also a GBC proposal everyone should distribute Srila Prabhupadas books as directed by His Divine Grace at least once a week the temple can organize everyone goes about from Bhakta to GBC ,it is also part of a GBC resolution but so far no GBC has set the example

PAMHO
AGTSP
I recall having read Jayananda Prabhu giving Srila Prabhupadas money for printing,or it could have been from the many remembrances I have heard by various Prabhupada disciples.

forword to my Narasimha book

dear Vaisnavas
Please accept my humble obaisences
All glories to Srila Prabhupada
All glories to the lotusfeet of the vaisnavas the 6 Goswamis and Lord Caitanya and all His associates headed by Lord Nityanada Prabhu
I have decided to try to write a book about Lord Narasimha as my many siksa Gurus have suggested over the last 15 years.
However I have hesitated then written something, started again, written many chapters, but each time I have not been pleased.These are… Continue

Payonidhi Das Das ‎55. Wearing a two pisa string a man is called a brahmin. Wearing a saffron cloth he has become a sannyasi.56. The householders beg from sannyasis, and why not? The sannyasis have tens of millions of rupees in the bank.57. As the days pass, the influence of Kali-yuga increases and the poor are crying in distress.
Srila Prabhupada 1961 Vyasapuja
about an hour ago · Comment · Like
William G Benedict likes this.
William G Benedict I should have taken sanyass… Continue

First Vaisistya 1. On that day, in pain of separation., oh Lord, I was grief stricken, Unable to tolerate being apart from my spiritual master.
2. On today's auspicious occasion, to offer you worship, I have come With this offering, remembering your lotus feet.
3. Mahaprabhu's principal conclusion is that… Continue

PAMHO
AGTSP
I have made way more friends in ISKCON than enemies but some are sadly very envious towards me.If even
some considered themselves enemies of Srila Prabhupada even of Krishna,then what to speak of a tiny jiva like me.
SB 10.14.8: My dear Lord, one who earnestly waits for You to bestow Your causeless mercy upon him, all the while patiently suffering the reactions of his past misdeeds and offering You respectful obeisances with his heart, words and body, is…

This is my humble request to HH Narayana Maharaja

dear Narayana Maharaja
Please accept my humble obaisences
All glories to Srila Prabupada
Today I have become very sad because some of your initiated disciples are taking drugs and having illicit sex, and am even proud of it ,and say I follow "Gurudev", why do you not ask those who take initiation from you to give up 4 kinds of sins Illicit sex ,gambling,meat eating and drugs ?

This is Srila Prabhupadas mood and serving his Guru Maharaja

PAMHO
AGTSP
One thing that has has to be said in praise of Harikesa (despite his many later deviations) is he trained us in the mood of Srila Prabhupada.That mood is to distribute
Srila Prabhupadas books,Did he show by example? Never ever , he would not even go on one Harinama also, or attend full morning program.Yesterday a former godbrother was finding faults with Srila Prabhupada how could Srila Prabhupada be so cruel and not leave any proper Guru.Well at least we where taught… Continue

PAMHO
AGTSP
In 1870th Srila Bhaktivinoda Thakura wrote about the Jagannath pandas, and he had all rights to as he was in charge of the worship for some years, in his article about Jagannath temple :http://nitaaiveda.com/All_Scriptures_By_Acharyas/Bhaktivinoda_Thakura/OTHER_BOOKS/Jagannatha_Mandira.htm, he writes
"We must admit that the Pandas and their Gomasthas… Continue

The Diary of Ratnavali Devi Das, a case of reincarnation

PAMHO
AGTSP
Many devotees might have read http://www.dandavats.com/?p=8892#comment-13051
The Diary of Ratnavali Devi Das

. I remember in 1987 or so a book circulated in ISKCON that I read with great interest, by Ian Stevenson http://www.near-death.com/experiences/reincarnation01.html, 20 Cases of reincarnation, actually Twenty Cases… Continue

this is my complaint

PAMHO
AGTSP
We all remember Kilan that was killed in the guest house of Krsna Balarama mandir, he had an accomplish in many of his demoniac activities Gadagara
,I am not sure of the spelling.But he and Kilan used to have illicit sex in the Guest house of Krsna Balarama mandir, Gadagaraj got one french bhaktin pregnant during Kartika
many years ago he later married this girl, he claims that left, and he has 2 kids with her.He has never been confronted about his past though he… Continue

can the GBC give its version of these allegations,please?

Dear Praghosa Prabhu
Please accept my humble obaisences
All glories to Srila Prabhupada
Many devotees all over the world is very shocked to read Mahavidya Prabhus accounts on Sampradaya sun:

I knew Mahavidya Prabhu when I served in the Bhaktidevanta Manor and Soho street in the past , and he made the Srila Prabhupada… Continue

They are not fit to be my Gurus

PAMHO
AGTSP
I am not a ritvik but after Harikesa fell down ,I realized none of the Gurus in ISKCON are fit to be my Guru , first of all they do not chant 64 rounds as ordered by Lord Caitanya
and Srila Prabhupada himself.They are mostly not free from the desire of pratistha and money.Srila Prabupada wanted all devotees in ISKCON to engage in bookdistribution and Harinama, they will most not engage themselves or disciples in this way.Though there is so many wonderful qualities in… Continue

Oh I have become Paramahamsa I do not need a Danda in sannysa asrama ,a very wrong idea