Dear members of the GBC and GBC secretaries and all devotees in ISKCON
Please accept my humble obaisences
All glories to Srila Prabhupada
Srila Prabhupada tried to introduce the chanting of 64 rounds in ISKCON,however his early disciples failed to obey this instruction.For someone acting as an initiated Guru or sannyasi this will improve their ability to guide and help other devotees, by focusing on the holy name.As we in ISKCON have a history of sannyasis and GBC's having fallen (and sadly many other devotees as well) it will also give protection, as Krsna and His holy name is non different.Srila Bhaktivinoda Thakura has advised 64 rounds even for Sad Grhasthas ,what to speak of for sannyasis and other leaders in ISKCON. If others then follow such leaders they will become empowered and successful in KC. 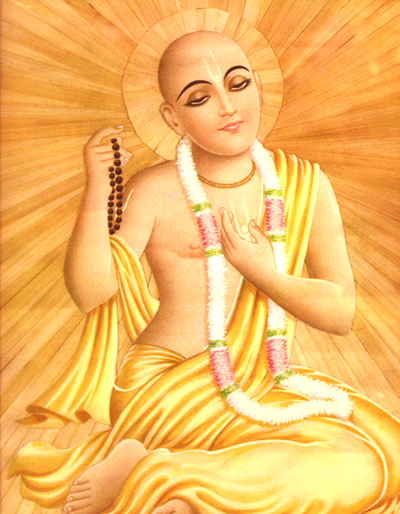 In Shri Chaitanya-bhagavata, Antya Khanda 9.121-122, Lord Chaitanya Mahaprabhu instructed everyone on whose worship and service He will accept:

"Do you know who is a laksesvara? He is someone who chants one laksa or 100,000 holy names (64 rounds of the Hare Krishna maha-mantra) everyday."

Shri Gaurasundera spoke as follows-"The Supreme Personality of Godhead accepts service only in the home of those who chant one hundred thousand names daily.

"The Lord accepts bhoga (foodstuffs) and other ingredients only from such personalities.

"Those who don't chant 100,000 names (64 rounds) daily, are never awarded the great fortune of rendering service to the Lord by offering Him naivedya (bhoga). This is because the Lord never accepts (svikara) their offerings.

The Lord continued-"Those who consider themselves devotees of the Lord must compulsorily chant 100,000 names of Krishna everyday otherwise they will gradually but surely become attached to varieties of sense-objects and thus become incapable to rendering any kind of service to the Lord."

(Shrila Sarasvati Thakura Prabhupada continues) "Therefore all the devotees who have taken shelter of Lord Chaitanyadeva perform the chanting of a minimum of 100,000 names of Krishna daily as their first and primary duty. Because they know that if they don't do so then Lord Gaurasundera will never accept the very bhoga (naivedya) which they cook for Him daily.

"Lord Gauranga continued-I call such a person a laksheshvara. I only accept meals in such a person's house. I never go anywhere else."

"The devotees of Lord Shri Chaitanya never talk with such non-devotees. They never do friendship with those who are engaged in the cultivation of karma, jnana or other desires which are devoid of bhakti.

"Those who don't accept this vow of chanting 100,000 names daily, fall down even more although they were fallen in the first place (due to the contamination of Kali-yuga). Thus their propensity for enjoying the senses and sense-objects continually and steadily increases and ultimately they are not able to render any kind of service even to the most merciful Lord Gaurasundera.

"This is the precise reason why the real Gaudiya-bhaktas do not accept any other ideal (adarsa) in Gaura-bhakti or Krishna-bhakti except the process of chanting 100,000 names of the maha-mantra daily.

"Those spiritual aspirants who are already fallen or will fall down from spiritual life in the future are averse to this sole means of deliverance called nama-bhajana, which is the worship of the sound incarnation of God in the form of chanting 100,000 names of the the Holy Names daily. Coming under the sway of their averseness to chant laksha-nama daily, they duplicitously invent (chalana) other means of devotional service (bhajana) to justify their not chanting 100,000 names daily but it is to be clearly understood that by this action they will not achieve anything auspicious (mangala) in their spiritual life."

"It is well-known that Namacharya Shrila Haridasa Thakura used to chant 300,000 names daily. Jagai-Madhai also used to chant 200,000 names daily after being delivered by the Lord. Lord Chaitanyadeva does not accept any kind of offering (or vastu) from those who don't chant 100,000 names of Krishna daily, The followers surrendered to the lotus of Lord Chaitanya compulsorily chant a bare minimum of 100,000 names daily. If they don't do so Lord Shri Krishna will not accept any of their offerings and thus they will be obstructed or remain unsuccessful in their attempt to obtain the transcendental remanants (prasadam) of the Lord."

"Then a devotee said, 'In America they are trying to chant more, twelve hours a day, trying to get a twenty-four-hour kirtana schedule.' 'Yes, everywhere,' Shrila Prabhupada said, 'this chanting should go on. Instead of meetings, resolutions, dissolutions, revolutions, and then no solutions, there should be chanting.'"

If the leaders are immersed in the nectar of chanting the maha-mantra, it will minimize most of the problems which arise in the society of spiritual sadhakas. It will also prevent the problems from arising in the first place. Even one or a handful of preachers who have reached the platform of offenseless chanting by the process of constant chanting (minimum 64 rounds), are sufficient to flood the whole world with the pure message of Krishna consciousness as taught by Lord Shri Gauranga Mahaprabhu and Shrila Prabhupada.
In Shri Chaitanya-bhagavata Madhya Khanda 23.77, Lord Gauranga Mahaprabhu instructed all the people of Navadvipa:

"Please hear this Hare Krishna maha-mantra. Everyone please chant this maha-mantra daily in 'nirbandha'*. Then you will surely achieve all perfection."

*Shrila Bhaktivinoda Thakura explains the meaning of 'nirbandha' in his classic book Hari-nama-cintamani as follows:

"All the previous mahajanas (great devotees) without exception have achieved success only through this process of chanting the Hare Krishna maha-mantra in atleast one nirbandha (64 rounds) daily."

So according to Shrila Thakura Bhaktivinoda, Lord Gauranga Mahaprabhu is instructing everyone to chant atleast one nirbandha (64 rounds) of the Hare Krishna maha-mantra everyday, to ensure the achievement of perfection in this harinama-sankirtana yajna in Kali-yuga. Complete perfection has been achived by all the great devotees in the past specifically by strictly following this order of Lord Gauranga Mahaprabhu of completing the chanting of a minimum of 100,000 names of the Hare Krishna maha-mantra daily without fail.

(Note: Both Shrila Prabhupada and Shrila Sarasvati Thakura Prabhupada have accepted Prema-vilasa as a bonafide scripture in their commentaries to Shri Chaitanya-charitamrita Adi-lila 13.60 purport.)

"Those who are Vaishavas must chant the Holy Names in a particular number everyday. Then Lord Gauranga, the supreme Abode of love will be merciful to them.

WHAT IS THAT NUMBER?

"Everyone should specifically chant or sing the name loudly 100,000 times a day (64 rounds) with the mood I have described earlier.

"O my disciple, Narottama! Please chant 100,000 names everyday while maintaining their count. If you chant in this way then you will become empowered by all the potencies of Lord Gauranga Mahaprabhu."

So from the above two verses, it becomes very clear that if one has to widely propogate the glories of the Holy Names, one has to get Krishna-shakti or Gauranga-shakti which is acquired when one completes the chanting of 100,000 names daily, according to Shrila Lokanatha Goswami.

ACHIEVE THE LOTUS FEET OF KRiShNA:

"I again repeat that if you want to achieve the lotus feet of Lord Krishna, then you have to chant 100,000 names daily. After chanting four rounds (one granthi) or one round, you should offer obeisances to the Hare Krishna maha-mantra.

From Prema-vilasa Chapter 17: Shrila Narottama to Shrila Kaviraja on the direct process to achieve love of Krishna:

"Lord Gauranga Mahaprabhu standard was to chant 3,00,000 names everyday. But He very mercifully awarded His devotees the process of chanting a minimum of 1,00,000 names of Krishna daily.

"Shrila Rupa Goswami has explained and quoted from over 100,000 different scriptures. Even though he was such a great scholar and devotee he himself chanted 100,000 Holy Names daily.

"Shrila Raghunatha dasa Goswami also rigidly followed the instructions of Lord Gauranga by chanting 100,000 names daily. In this way all the devotees chanted the Holy Names of the Lord daily without exception.

"Lord Gauranga gave the following instructions to all the Vaishnavas Himself and also through Shrila Rupa Goswami: Please compulsorily chant 100,000 names of Krishna daily."

SHRILA NAROTTAMA AND HIS FOLLOWERS:

"Whenever they used to get an opportunity throughout the day, all of the devotees used to chant the Hare Krishna maha-mantra. In this way they used to complete the chanting of 100,000 Holy Names of the Lord daily.

"Shrila Thakura Narottama considering himself worthless in his natural humility, called all his disciples, followers and friends, and spoke to them the following important instructions.

"Those whose top priority in this life is to achieve the lotus feet of Lord Gauranga-Krishna should voluntarily chant 100,000 Holy Names of daily."


your servant in service to Srila Prabhupada
Paramananda  das
PS This is just a drop in the ocean of the sastric references to the importance of chanting 64 rounds.

Lord Krishna’s holy name is the only auspiciousness in this world. If one keeps it in his throat, then what is Yamaraja, the king of the other world, to him? What are Yamaraja’s sevants to him?

O Supreme Personality of Godhead, when someone desires to chant Your holy name, sins tremble in fear, the glory of material illusion faints unconscious, Yamaraja’s scribe Citragupta becomes happy and gazes at the chanter’s toenails with awe and reverence, and Lord Brahma prepares madhu-parka to worship him. O Lord, what more can we say than this?

Let the twice-born enter the fearless kingdom of yoga, Vedic study, and solitary meditation in the forest. Let them become liberated in that way. As for us, we will spend hundreds of thousands of births chanting the holy name of Lord Krishna, whose splendid dark complexion and yellow garments are like a host of blue lotus flowers blooming in a grove of yellow-flower-bearing kadamba trees.   —Shri Ishvara Puri