·
Once Sri Radharani along with her Gopi friends was waiting for the association with Krishna. Completely absorbed in the intense feeling of separation from Lord Krishna Gopis started chanting: “Harideva, Harideva, Harideva” again and again. They were so much overpowered by this feeling of separation from Krishna that they were on the verge of giving up their lives. Suddenly, Lord Krishna appeared before them in the form of a seven year old boy lifting Govardhan hill in his left hand…

Gita Mahatmya: Chapter Eleven
The Glories of Eleventh Chapter of the Bhagavad Gita from the Padma Purana

Lord Shiva said “My dear Parvati, now I will relate to you the glories of the Eleventh Chapter of Srimad Bhagavad-gita. It is not possible to tell it’s full glories, as there are thousands of stories, I will relate one of them only. 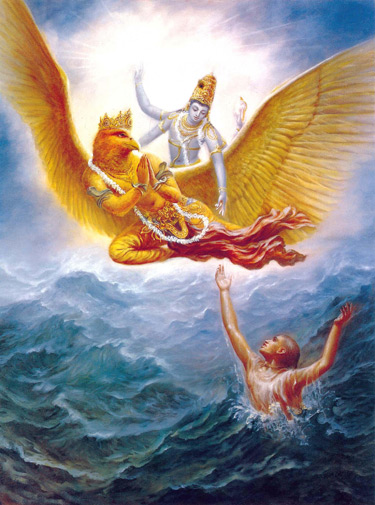 On the banks of the Pranita river is a large town of the name Megankara in which is the famous temple of Jagat Isvara.…

Jesus Christ like Bhismadeva experienced lots of pain , Bhismadeva lied on a bed of arrows for 58 days imagine the uncomfortable situation ? Though Jesus Christ was Crucified he did not day he went into a Yogic trance and after 3 days he came out of it , then he took his mother Mary and they both walked all the way from Jerusalem to India , there Mary died and Jesus Christ continued his journey to Sri Nagar in North India and there is where Jesus Christ lived the rest of his life .Mystic…

Bhismadeva took the vow of celibacy so his father Santanu could marry Satyavati actually Bhisma was the son of Santanu and Gangadevi .His name was Devarata ,Bhisma was given due to his powerful vow of celibacy and heaven shook and the demigods proclaimed Bhisma, Bhisma , Bhisma (means one who took a terrible vow, for the demigods who enjoy sex life such a vow of celibacy is terrifying ) karmana manasa vaca sarvavasthasu sarvada
sarvatra maithuna-tyago brahmacaryam…

so before reading Mahabharata we offer our humble obaisences to Lord Sri Krsna ,Lord Brahma , Srilla Vyasadeva and Sri Ganesh and Vaisampayana and Maharaja Janamajaya
SB 6.8.19…

former Harikesa das or Harikesa Swami challenged that Sanjaya that spoke the Bhagavad Gita to Dhrtarastra was a mundane person more or less ,I strongly objected and quoted Bg 18.78
yatra yogeśvaraḥ kṛṣṇo
yatra pārtho dhanur-dharaḥ
tatra śrīr vijayo bhūtir
dhruvā nītir matir mama
:
Wherever there is Kṛṣṇa, the master of all mystics, and wherever there is Arjuna, the supreme archer, there will also certainly be opulence, victory, extraordinary power, and…

Simple living ,High thinking and no time for Ahankara !

One should go on Padayatra once in once life in India, free from lazy neophytes that just want to sit in the temple and eat and sleep, there you can go and chant Hare Krsna all day long in Kirtana and japa easy to chant 64 rounds there , and attending all morning and evening programs .I think it is good atonement for those who have fallen down from Bhakti also , they will visit many holy places and get purified .You can read…

the advanced devotees sees that this body belongs to Sri Sri Radha and Krsna so Narada Muni in Narada Pancaratra has given this protective prayer Radha Kavacha, actually Narada Munis spiritual identity in Vraja is Naradiya Gopi , Purnamasi took Narada Muni to Kusuma Sarovara and asked him to take a dip inside it and then he came out as a sakhi , I am not sure what kind of service…

my Vyasapuja offering to Srila Prabhupada 2018

My Vyasapuja offering to Srila Prabhupada 2018 :

dear Srila Prabhupada
Please accept my humble obaisences at your lotusfeet
Once again I am here in front of you for your holy Vyasapuja day on Nandotsava .
This is my 39th time I have attended your Vyasapuja celebration .40 years ago I recieved your books
and I joined ISKCON shortly after , 41 years ago I started to read your Bhagavad Gita as it is , but I met a sankirtana devotee 40 years ago .Your books are…

Please hear the glories of Kamika Ekadasi if you do with faith you will attain the spiritual world! Kamika Ekadasi : The saintly king Yudhisthira maharaj said, "Oh Supreme Lord, I have heard from You the glories of fasting on Deva-sayani Ekadasi, which occurs during the light fortnight of the month of Ashadha. Now I would like to hear from You the glories of the Ekadasi that occurs during the dark fortnight (krishna paksha) of the month of Shravana (July -August). Oh Govindadeva, please be…

Lord Shiva said, “My dear Parvati, I will now relate to you the glories of the Tenth Chapter of the Srimad Bhagavad-gita, as related by Lord Vishnu to Lakshmi-Devi which in itself is a stairway to the spiritual world.

In Kashipuri, there was a Brahmana of the name Dhirabuddhi, who was as dear to me as Nandi, my carrier. He was always peaceful and all of his senses were fixed in the glorification of Lord…

What associate of Krsna in Vraja are you taking shelter of ?

What associate of Krsna in Vraja are YOU taking shelter of ?
You have to take shelter of one of Krsnas associates in Vraja and that associates in Gaura lila :
Nectar of Instruction is a book we must carefully study over and over again , sloka 8 is one of the important slokas not only study but following to the very last word :
tan-nāma-rūpa-caritādi-sukīrtanānu-
smṛtyoḥ krameṇa rasanā-manasī niyojya
tiṣṭhan vraje tad-anurāgi-janānugāmī
kālaṁ nayed akhilam ity…

Nectar from the Puranas about Caturmasya : Various vows and austerities during Caturmasya and their respective results:

Nectar from the Puranas about Caturmasya : Various vows and austerities during Caturmasya and their respective results:
Krsna to Yuddhistira Maharaja :
"O King, one who is My devotee and is fixed in vow, whether man or woman, for the purpose of dharma, should accept these various austerities and observances. I shall now describe to you all of them along with their respective results.
01) No salt - One's voice becomes sweet.
02) No oil - One's life is prolonged and gets…

Those grhasthas that sleep in the same room as their wife have illicit sex!

Those grhasthas that sleep in the same room as their wife have illicit sex!

In 1995 I was asked to leave ISKCON Potomac temple because I opposed demigod worship in the culture hall and some ISKCON congregation going inside the culture hall and attending these bogus events.Later the GBC passed laws in 1996 to rectifie this mistake when I complained about it to the GBC. Anyhow it was all l part of Krsnas plan for me .So somehow Brahmananda Prabhu would come and visit me and those…

When to reject the fallen Guru

When to reject the fallen Guru :
if ones spiritual master falls down from devotional service and become an asura he should be rejected in Krsna Bhajanamrta it is clearly stated : Verse 62
The natural behavior of the Vaisnava devotees is to take complete refuge of Lord Sri Krishna, the Supreme Personality of Godhead, accepting Him as their principal and real shelter. The very life
of the Vaisnava devotees of the Lord is singing the glories or Lord Sri Krsna, describing and…

glories of chapter 9 of Bhagavad Gita from Padma Purana , told by a saintly goat!

please read this carefully how even a goat attained the lotusfeet of Lord Govinda by remembering chapter 9 of Bhagavad Gita :The Glories of the Ninth Chapter of the Bhagavad Gita from the Padma Purana

Lord Shiva said. “My dear Parvati, now I will relate to you the glories of the Ninth Chanter of Srimad Bhagavad-gita.