SB 1.8.1 — Sūta Gosvāmī said: Thereafter the Pāṇḍavas, desiring to deliver water to the dead relatives who had desired it, went to the Ganges with Draupadī. The ladies walked in front.
SB 1.8.2 — Having lamented over them and sufficiently offered Ganges water, they bathed in the Ganges, whose water is sanctified due to being mixed with the dust of the lotus feet of the Lord.
SB 1.8.3 — There sat the King of the Kurus,… 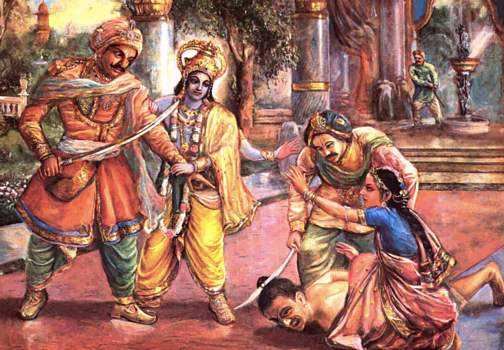 SB 1.7.1 — Ṛṣi Śaunaka asked: O Sūta, the great and transcendentally powerful Vyāsadeva heard everything from Śrī Nārada Muni. So after Nārada’s departure, what did Vyāsadeva do?
SB 1.7.2 — Śrī Sūta said: On the western bank of the river Sarasvatī, which is intimately related with the Vedas, there is a cottage for meditation at Śamyāprāsa which enlivens the transcendental activities of the sages.
SB 1.7.3 — In that place, Śrīla… 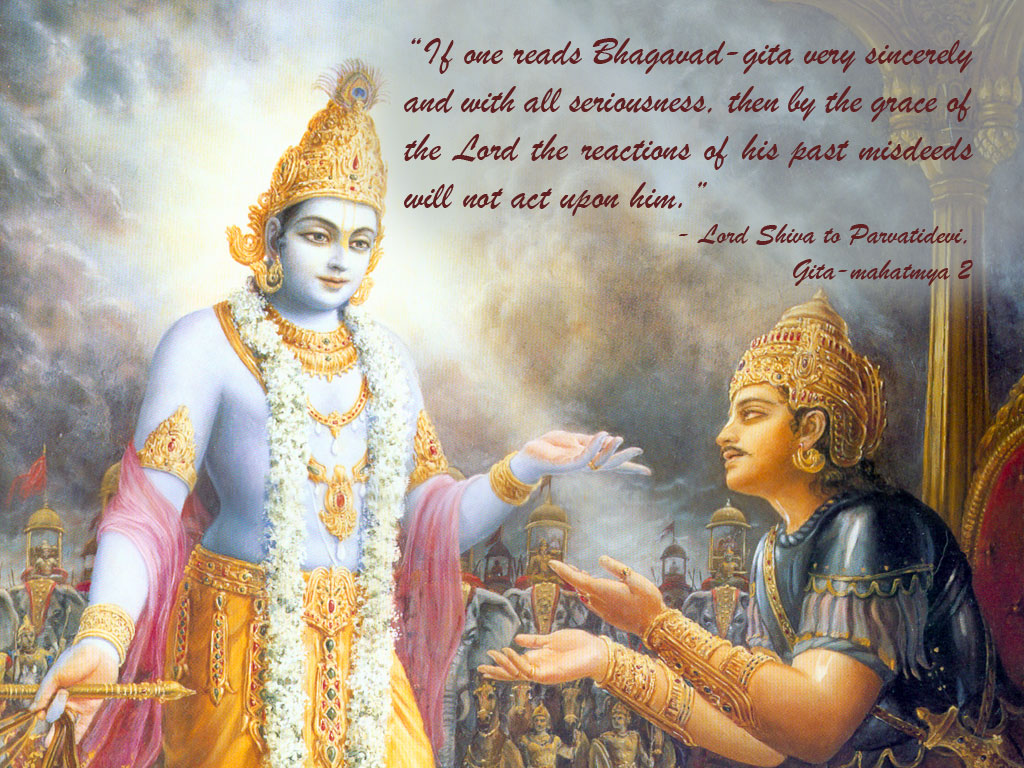 Lord Shiva said, “Oh Parvati, please hear the unlimited glories of the Thirteenth Chapter of the Srimad Bhagavad-gita, by hearing which, you will become very happy.

In the South, there was a very large river of the name Tungabhadra, on the banks of which; there is a very beautiful town of the name Hariharpur. There, the deity of Lord Shiva, known by name Harihar, is…

Response to Stern Magazine in 1974 from ISKCON

There is a website about ISKCON Germanys early days ,actually our ISKCON Denmark history was also affected by the German devotees

There first devotees that came to Denmark to preach where from Germany ,BhaktiBhusana Swami was then a grhastha and had a small daughter ,his wife had left ISKCON but he insisted to keep the daughter and her mother told the West German Police her daughter was kidnapped, because Bhakti Bhusana Swami had taken his daughter out of the temple and to Copenhagen…

Meaning of the Hare Kṛṣṇa Mantra

Once Vallabhacarya met Mahaprabhu in Jagannatha Puri and asked about the meaning of Kṛṣṇa’s name. Lord Caitanya was sitting amongst His most intimate followers including Sri Nityananda Prabhu, Sri Advaita Acarya, Sarvabhauma Bhattacarya, Sri Svarupa Damodara, Sri Raya Ramananda, Sri Rupa Gosvami and Sikhi Mahiti. When Mahaprabhu failed to reply, Vallabhacarya repeated the question because he wanted to present his own scholarly explanation. Finally…

This chapter explained the transcendental ecstacy of Lord Caitanya .He is the Supreme Lord and showing us to how serve Radha Krsna in the mood of a manjari .Lord Caitanya came to experience the love of Sri Radha and the Gopis and bestow manjari bhava on those who are qualified .Of course not everyone will become a manjari , most in the material world is…

SB 1.6: Conversation Between Nārada and Vyāsadeva
SB 1.6.1 — Sūta said: O brāhmaṇas, thus hearing all about Śrī Nārada’s birth and activities, Vyāsadeva, the incarnation of God and son of Satyavatī, inquired as follows.

SB 1.6.2 — Śrī Vyāsadeva said: What did you [Nārada] do after the departure of the great sages who had instructed you in scientific transcendental knowledge before the beginning of your present birth?
SB 1.6.3 — O son of Brahmā, how did you pass your…

Sri Krishna as the Lord of the Universe (As issued from the mouth of Lord Caitanya)

"Sometimes in great happiness Lord Jagannatha, with His flute, makes a loud concert in the groves on the banks…

Sri Nama Prabhu of whom we must always take shelter !

Sri Narada said, “O young lady, why are you in so much anxiety? Don’t be melancholy unnecessary. Just meditate on the lotus feet of Lord Sri Krsna and by His mercy you will be free from all misery.1

( 1. This is the only panacea for anxiety. When the mind is fixed on Krsna, it cannot experience agitation. That’s why devotees are always free from…

Chapter One
The Meeting of Narada Muni and Bhakti Devi
Invocation

We offer our humble obeisances unto Lord Sri Krsna, whose transcendental form is bliss personified. He is the cause of the creation, maintenance and destruction of the universe and the destroyer of the three types of miseries.

We pay our humble obeisances to Sri Sukadeva…

SB 1.5: Nārada’s Instructions on Śrīmad-Bhāgavatam for Vyāsadeva
SB 1.5.1 — Sūta Gosvāmī said: Thus the sage amongst the gods [Nārada], comfortably seated and apparently smiling, addressed the ṛṣi amongst the brāhmaṇas [Vedavyāsa]. 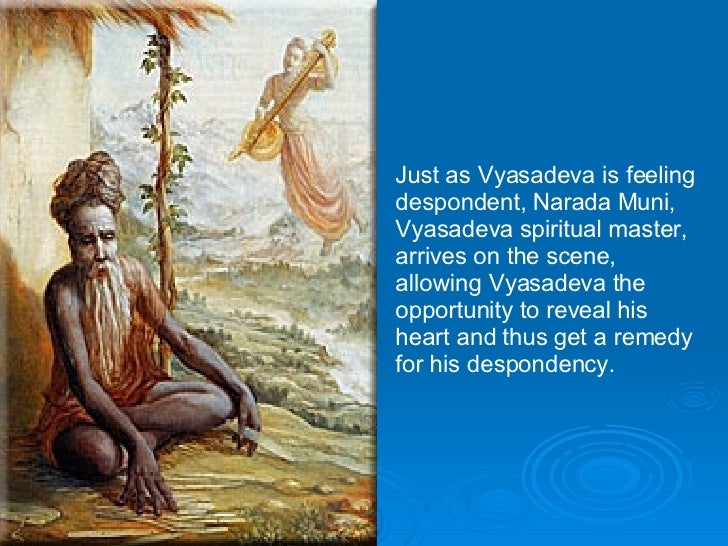 SB 1.5.2 — Addressing Vyāsadeva, the son of Parāśara, Nārada inquired: Are you satisfied by identifying with the body or the mind as objects of self-realization?
SB 1.5.3 — Your inquiries were full and your studies were also well…

“ Sachidanand rupaya vishvotpatyadi hetve, tapatraya vinashaya shri krsnaya vayam namah ”
In Naimisharanya, where 88,000 sages had assembled for a sacrificial yagna for a thousand years, Suta expounded the glory of Shrimad Bhagwat and informed Saunaka and the other sages that Shrimad Bhagwat secures the attainment of moksha by any person just as Pariksit attained it when Suka expounded the Shrimad Bhagwat to him. Sutapuran then commenced the discourse by giving an insight of the…