I had a dream of Srimati Radharani!

I had a dream of Srimati Radharani!
Some years ago 8 years or so, I was not able to go on bookdistribution in the freezing cold weather,I have been distributing Srila Prabhupadas books even in minus 60 celcius when I was 20 years old in Northern Sweden .But due to my heart condition in 2010 atriel Fibulation ,my heart said stop to severe tapasya so I have had to stop distributing Srila Prabhupada books in extreme cold and hot weather.So that year I decided to do a temporary job as a…

Srila Narayana Maharaja gave this wonderful lecture in Springfield Virginia in 1999 at the house of Aghraya Prabhu ,this is the time I took reinitiation from Srila Gurudedeva one year after Harikesa had falplen down in 1998,Srila Gurudeva also met with Baladeva Vidhyabhusana das a disciple of Satsvarupa Maharaja and he asked where are my letters from Srila Prabhupada ? Actually Satsvarupa Maharaja had borrowed many letters written by Srila Prabhupada to Srila Narayana Maharaja over many…

Lord Narasimha is superior to Parasurama

Who is right Srila Prabhupada or Srila Kavi Karnapure ?

Who is right Srila Prabhupada or Srila Kavi Karnapure ?

A Genuine Goswami
26 May 2013
Śrīla Bhakti Siddhānta Saraswatī Ṭhākur’s praise of his disciple Śrīla Bhakti Sāraṅga Goswāmī Mahārāj.
Translated from a Bengali article in the 25 Māgh 1335 (7 February 1929) issue of the daily Nadia Prakāś.
In the great land of Bhārat, from distant Kashmir near the high peaks of the Himalayas to the banks of the Indian ocean, who does not know Bhakti Sāraṅga Prabhu? …
Śrī Bhakti Sāraṅga Prabhu is the brightest jewel in the lineage of…

Pankajanghri Prabhu served in Mayapure for many years , so I have no worries he went back to Godhead.However I want to share my last interaction with him couple years ago.Prithu das from "Germany" saw my posting about Sri Advaita Acarya should not be worshipped with a beard because Srila Bhaktisiddhanta Prabhupada was very much oposed to it and called it Sahajiya .He shared it with Pankajanghri Prabhu who then wrote me arguing Srila Prabhupada…

my purport to Bhagavad Gita 2.4

Chapter 2: Contents of the Gita Summarized

Calling Out to Lord Govinda

1 This book, Shri Govinda-virudavali, is very auspicious. When one reads it Shri Govinda becomes pleased.
2 O lotus-eyed Lord, when You wish to enjoy pastimes in the material…

First time I met Bhakti Caru Swami was in 1986 in Vrindavana ,he was just arriving and sitting humbly in the lobby in the guest house of Krsna Balarama temple outside Srila Prabhupadas rooms back then he had no disciples or own temples etc ,he had no servants nothing.Simple humble sannyasi , I paid my obaisences, and asked if I could offer him anything ? He smiled and we had a nice conversation , he knew Harikesa who was my then Guru ,I believe I…

The women from Mithila that became gopis !

The women from Mithila that became gopis !
If you have not read Garga Samhita you are missing out ,so anyway this is why I am sharing things from there .This chapter is from the 4 th canto fo Garga Samhita, the Mithila women are ladies of Janaka Maharaja kingdom, not only Sita wanted to marry Lord Ramachandra but many women in Mithila wanted too so Lord Ramachandra blessed them in your next life you will become Gopis of Vraja, so they where very blessed because they where born in the…

why not just accept Srila Prabhupada and Sastra ?

Is "Sri Lanka" the Lanka of the Ramayana? (shyamasundaradasa.com)
Shyamasundara das the socalled ISKCON astrologer wrote this misinformation that Sri Lanka is not the place where Lord Ramachandra went,Listen to any lecture of Srila Prabhupada about Ramanavami where Srila Prabhupada states in many places ,that Sri Lanka Cylon is the place of Ravanas kingdom .
It is mentioned in many sastras and confirmed by acaryas, there is the Rama setu from Ramesvarama to Sri Lanka ,there are…

the pastime of t he sages of Dandakaranya how they became gopis and what happened next !

When Lord Ramachandra came to Dandakaranya forest all the sages wished to change body and become wifes of Lord Ramachandra, Lord Ramachandra said no I have only one consort it is Sitadeva, but I bless you in your next life you can become Gopis in Vraja and marry Sri Krsna, so from this point of understanding you can read this chapter two of the 4th canto in Garga Samhita .Srila Jiva Goswami explained that all the Gopis of Vraja though in parakriya Bhava are eternally married to Lord Sri…

GS 4.1: The Story of the Personified Vedas

glories of Kamada ekadasi from 2 Puranas

glories of Kamada ekadasi from 2 Puranas
I was sendng the glories of Kamada ekadasi from Brahma Vaivarta Purana earlier this is from Varaha Purana and quoted by Krsna Balarama Swami in his Ekadasi book .Kamada ekadasis frees us from demoniac curses, from birth and death and from every goign to the the abode of Yamaraja and it promotes us to the Spiritual world best is to do full fast Nirjala if you can and chant 128 or 192 rounds at least 64 rounds of the Mahamantras and read sastra all…

Is ISKCON now a cult ?

Is ISKCON now a cult ?
the GBC seem to reject many instructions of Srila Prabhupada ,such a not having female TPs and GBC
Temples serving grains on Visnutattva days !
Many grhasthas are not following the 4 regs and some even use condoms and birth control, they remarry and thus are really Sudras and grhamedish !
Some sannyasis are in name only looking for money and flattering brainless female disciples
Some socalled sannyasis have engaged in homosex and pedophilia…

GS 4.8: In the Story of the Yajna-sitas, the Glories of Ekadashi

GS 4.8: In the Story of the Yajna-sitas, the Glories of Ekadashi
The interesting thing about Garga Samhita like here in canto 4 it gives so much details ,the Yajnic Sitas ,where Deities of Sita used in fire sacrifices, after Sita was banished to the forest, and each time a Yajna was there another Sita Deity installed because Lord Ramachandra could not do these Yajnas without His wife,so one day all the Yajnic Sitas came to life as Deities are persons and they demanded Lord Ramachandra…

GS 4.5: The Story of the Ayodhya Women

Subject: GS 4.5: The Story of the Ayodhya Women

By reading and understanding the glories of some woman in Ayodhya how they became Gopis one attaines Goloka Vrindavana, many women in Ayodhya that was unmarried desired Lord Ramachandra as their husband, but Lord Ramachandra took the vow of Ekapatni only one wife, so He blessed them in their next life to becomes Gopis ,so this is explained by Garga Muni in Canto 4 of Garga Samhita chapters 5 ,6 and 7 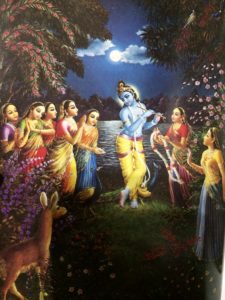 Sri Ramashtakam
(8-verses in glorification of Lord Ramachandra)
From Sri Chaitanya-charita mahakavya
by Srila Murari Gupta (Incarnation of Hanumanji)
rajat-kirita-mani-didhiti-dipitasam
udyad-bhaspati-kavi-pratime vahanta
dve kundale 'nka-rahitendu-samana-vaktra
rama jagat-traya-guru satata bhajami
Though His face is like a spotless moon, still it is further brightened by a shining crown of jewels. His earrings resemble Jupiter and Venus rising in the evening…