why does Jayadvaita Swami get everything wrong ?

"burdened by a spouse"

so many male devotees write "burdened by a spouse" on facebook  good then why are you not taking sannyasa instead of insulting your wife ???
yadi te hari-pāda-saroja-sudhā-
rasa-pāna-paraḿ hṛdayaḿ satatam
parihṛtya gṛhaḿ kali-bhāva-mayaḿ
bhaja…
Continue 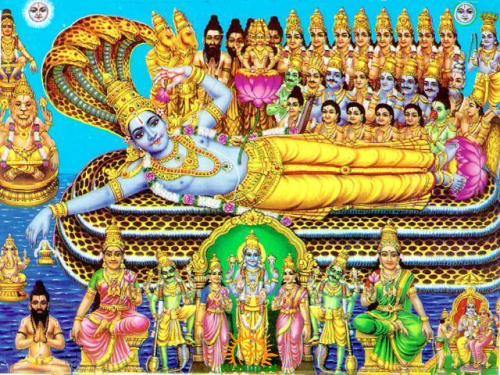 Balarama was laughing (prahasya) because He thought, “Krishna never cares to play with Me in My form of Sesa Naga, but now He is playing with this common, mundane snake named…
Continue

Lord Narasimhas pastimes from the Puranas

Narasimha Purana is one of the 18 Upa Puranas written by Srila Vyasadeva , Upa Purana just means that it does not cover the 10 subjects of the Mahapuranas , but 5 or more.This has been explained by Sukadeva Goswami in the 12 Canto chapter 7:
sargo 'syātha visargaś ca
vṛtti-rakṣāntarāṇi …
Continue

Lord Nrsimha is so exalted that even His nails are glorified by the Vaishnava acharyas! In the Sudarsana-sata-nama stotra of the Sri Vaishnava sampradaya, it is said that Lord Narayana's Sudarshana Chakra descended as the tusk of Varaha, the axe of Parasurama, and the nails of Nrsimha. In this way, the nails of Nrsimha accompany the Lord in His various avatars.
Trivikram Panditacarya a disciple of…
Continue

Rukmini mataji is also preaching this nonsense a woman can be a Guru and being the wife of a GBC has overpowered him to accept a female TP, he is controlled by his wife and her adharmic ideas a GBC controlled by a woman is not fit to be a GBC ·  Braja Bihari das  is fully under the control of his wife so he also favors…