SB 3.2: Remembrance of Lord Kṛṣṇa
SB 3.2.1 — Śrī Śukadeva Gosvāmī said: When the great devotee Uddhava was asked by Vidura to speak on the messages of the dearest [Lord Kṛṣṇa], Uddhava was unable to answer immediately due to excessive anxiety at the remembrance of the Lord.
SB 3.2.2 — He was one who even in his childhood, at the age of five years, was so absorbed in the service of Lord Kṛṣṇa that when he was called by his mother for morning breakfast, he did not wish to have…

Krsna also performs boating pastimes at Manasi Ganga at Govardhana ,Krsna manifested Ganges from His mind there so the Vrijabasis did not have to leave Vrindavana to go to the Ganges ,this is the Adi Ganga in Vraja (1)

SB 2.7.24 — The Personality of Godhead Rāmacandra, being aggrieved for His distant intimate friend [Sītā], glanced over the city of the enemy Rāvaṇa with red-hot eyes like those…

Lord Shiva said; “Oh daughter of the Himalayas (Parvati), please listen to the glories of the Eighteenth Chapter of Srimad Bhagavad-Gita, which is higher than the Vedas and the giver of unlimited…

SB 2.7: Scheduled Incarnations with Specific Functions
SB 2.7.1 — Lord Brahmā said: When the unlimitedly powerful Lord assumed the form of a boar as a pastime, just to lift the planet earth, which was drowned in the great ocean of the universe called the Garbhodaka, the first demon [Hiraṇyākṣa] appeared, and the Lord pierced him with His tusk.
SB 2.7.2 — The Prajāpati first begot Suyajña in the womb of his wife Ākūti, and then Suyajña begot demigods, headed by Suyama, in the womb… 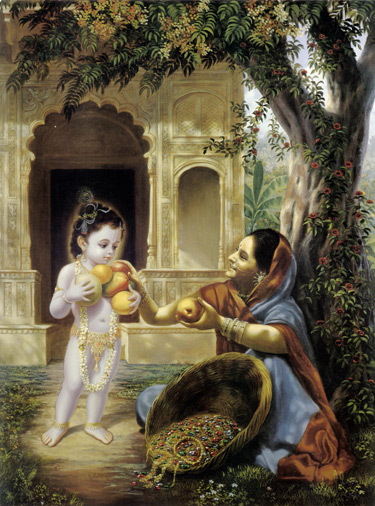 King Khadgabahu’s son had a servant by the name of Dushasan who was very crafty and exceptionally foolish. Dushasan made a bet with the prince that he…

from Sraddha to Prema

You should first try to come in niṣṭhā. Do you know what is niṣṭhā? At first there is śraddhā, and when śraddhā is matured it becomes niṣṭhā. Niṣṭhā is a good, high thing. Then the mind is fixed. There is no doubt in any siddhānta—no doubt. At that time māyā will not attract. At that time we will chant harināma, yet with no taste, but we see that there is no remedy without taking the chanting of Hari’s name. So, even if there is no taste at the time of niṣṭhā, we know that there is nothing…

Antya 4: Sanātana Gosvāmī Visits the Lord at Jagannātha Purī
The fourth chapter is summarized by Bhaktivinoda Ṭhākura in his Amṛta-pravāha-bhāṣya as follows. Śrīla Sanātana Gosvāmī came alone from Mathurā to Jagannātha Purī to see Lord Caitanya. Because of bathing in bad water and not getting enough food every day while traveling on the path through Jhārikhaṇḍa (Jharkhand) Forest, he developed a disease that made his body itch. Suffering greatly from this itching, he resolved that in…

If we want to perfect our human form of life , you must read Harinama Cintamani not only one time but over and over again as it helps us understand the glories of Sri Harinama ,Srila Bhaktivinoda Thakura was a liberated soul and is the eternal manjari of Radha Krsna ,Kamala Manjari so for us to read his Hari Nama… 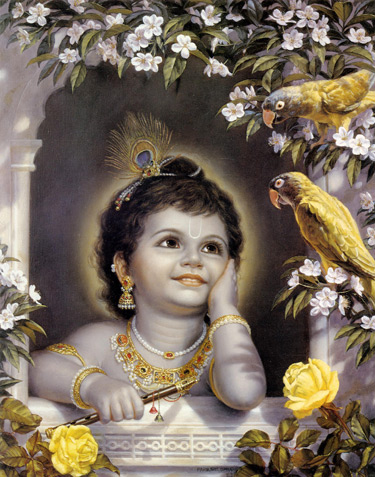 Lord Shiva said, “My dear Parvati, I will now tell you the glories of the Sixteenth Chapter of Srimad Bhagavad-gita.

In Gujarat, there is a town of the name Saurashtra (Surat). King Khadgabahu had his kingdom there, where he lived just like another Indra, king of heaven. He kept a very passionate…

SB 2.5: The Cause of All Causes
SB 2.5.1 — Śrī Nārada Muni asked Brahmājī: O chief amongst the demigods, O firstborn living entity, I beg to offer my respectful obeisances unto you. Please tell me that transcendental knowledge which specifically directs one to the truth of the individual soul and the Supersoul.
SB 2.5.2 — My dear father, please describe factually the symptoms of this manifest world. What is its background? How is it created? How is it conserved? And under whose…

Chapter 15, Verse 1
The Blessed Lord said: There is a banyan tree which has its roots upward and its branches down and whose leaves are the Vedic hymns. One who knows this tree is the knower of the Vedas.

Chapter 15, Verse 2
The branches of this tree extend downward and upward, nourished by the three modes of material nature. The twigs are the objects of the senses. This tree also has roots going down, and these are bound to the fruitive actions of human…

No sex life in Vaikuntha

1967 Correspondence
Letter to Brahmananda -- San Francisco 21 December, 1967: Please accept my blessings. Your handwritten letter of 12/18/67 is a great pleasure. Your handwritten letter is more valuable than type written. Regarding Damodara's plight, we are very sorry but we must always expect that some of the weak soldiers may fall down in a fight waged against the great Maya external energy of Krishna. The sex attraction is very great in the material world. But in the spiritual world…

Please accept my humble obaisences
All glories to Srila Prabhupada
Srila Bhaktivinoda Thakura and Srila Bhaktisiddhanta Prabhupada did nirjala fasting on Gadadhara Pandits Apperanceday, so true Raganuga vaisnavas or just any real Gaura Gadadhara bhaktas should in my humble opinion do the same. He is non different from Sri Radha and is the life and soul of Lord Gauranga and Gadadhara Pandits life and soul is Lord Gauranga

"No one can describe the characteristics and ecstatic…

Sri Sannanda said: Ordered by Lord Krishna in Goloka, Yamuna, the best of rivers, circumambulated the Lord and was about to go (to the earth).

We just passed Easter for the Christians it is the most important event, the Greek Orthodox faith fast for 40 days only having a Vegan meal in the Evening , on Long Friday , they bow down to Jesus Christ hundreds of times .
In all Historical accounts of something that happened so long ago, the cruzification of Jesus Christ and his death is described in so many written testimonies now only of his disciples but of other…

SB 2.4: The Process of Creation
SB 2.4.1 — Sūta Gosvāmī said: Mahārāja Parīkṣit, the son of Uttarā, after hearing the speeches of Śukadeva Gosvāmī, which were all about the truth of the self, applied his concentration faithfully upon Lord Kṛṣṇa.
SB 2.4.2 — Mahārāja Parīkṣit, as a result of his wholehearted attraction for Lord Kṛṣṇa, was able to give up all deep-rooted affection for his personal body, his wife, his children, his palace, his animals like horses and elephants, his…