maybe you saw I posted about Sri Radha doing Rasa lila with Krsna in Dvaraka from Garga Samhita, it seems like RasaBhasa, but it is not , this form of Radha is Viyogini Radha as explained by Srila Gurudeva https://www.purebhakti.com/.../168-navadvipa-puri-and...
when Sri Radha meets Krsna in Kuruksetra and Dvaraka those pastimes are Viyogini Radha, Vrisabhanu Nandini never leaves Vraja and also Vrajendranandana Krsna…

the socalled mystic powers of Harikesa and Kirtananda

One of my former Godbrothers was Janesvara from Sweden .One day on sankirtana he stated that Harikesa has all 8 mystic powers. now Srila Prabhupada writes : Those who are spiritually advanced by yogic mystic power, they can move anywhere they like. Anima, laghima siddhi. There are still yogis in India who early in the morning take bath in four dhamas: Hardwar, Jagannatha Puri, Rameshvaram, and Dvaraka(sarva-gatah. They’ll sit down…

dear Sir are you a sahajiya ?

A Greedy Gang of Thieves

A Greedy Gang of Thieves
Srila Vrindavana Dasa Thakura has narrated this astonishing pastime in Chaitanya-bhagavata (Antya-khanda 5.527–706). The leader of the gang, who had been born in a brahmana family, had rejected religious principles to associate with wicked, materialistic people and lead a sinful life of cheating, stealing, and even murder. Fortunately for him, he dwelled in the holy land of Navadvipa when Lord Nityananda was performing His pastimes there.
Lord Nityananda…

the fight between Dronacarya and King Drupada ,they where godbrothers !

the fight between Dronacarya and King Drupada ,they where godbrothers !
In Mahabharata King Drupada treated Dronacarya with such disrespect , simply because he asked for one cow , so he could feed his family ,.Later however Dronacarya send the Pandavas to capture Drupada and destroy his army ,they did ,you properly know how Drupada did tapasya and had Drupadi and Dhristaduymna as his children.King Drupada was killed by Dhronacarya on the battle of Kuruksetra though they used to be…

Sri Saunaka Rishi said, “O Suta, I have heard from you the Puranas, which contain

countless stories about the pastimes of Lord Hari.…

My visit to BhavaNarayana Swami

My visit to BhavaNarayana Swami
Most likely you have never heard of this temple neither had I in 1986 somehow I was invited to stay with one devotee family in Kakinada, Andhra Pradesh , from there I visited Ahovalam ,Mangala Giri, and Simhacalam and many temples of Lord Narasimha. Harikesa my ex Guru had asked me to be on Padayatra, and I was in all of 1985 , but I really did not care much about Harikesa due to his envious politics of me because I just wanted to distribute Srila…

I will urininate on your samadhi !

I will piss on your Samadhi
So many devotees wants to be placed in a big Samadhi .Fine let all the neophytes have a Samadhi as far as I am concerned I piss on the Samadhi of anyone that never spend most of their life distributing Srila Prabhupadas books,,I may not do it physically but have no real respect for any vaisnavas that ignored the suffering of humanity and did not spend most of his life distributing Srila Prabhupadas books … 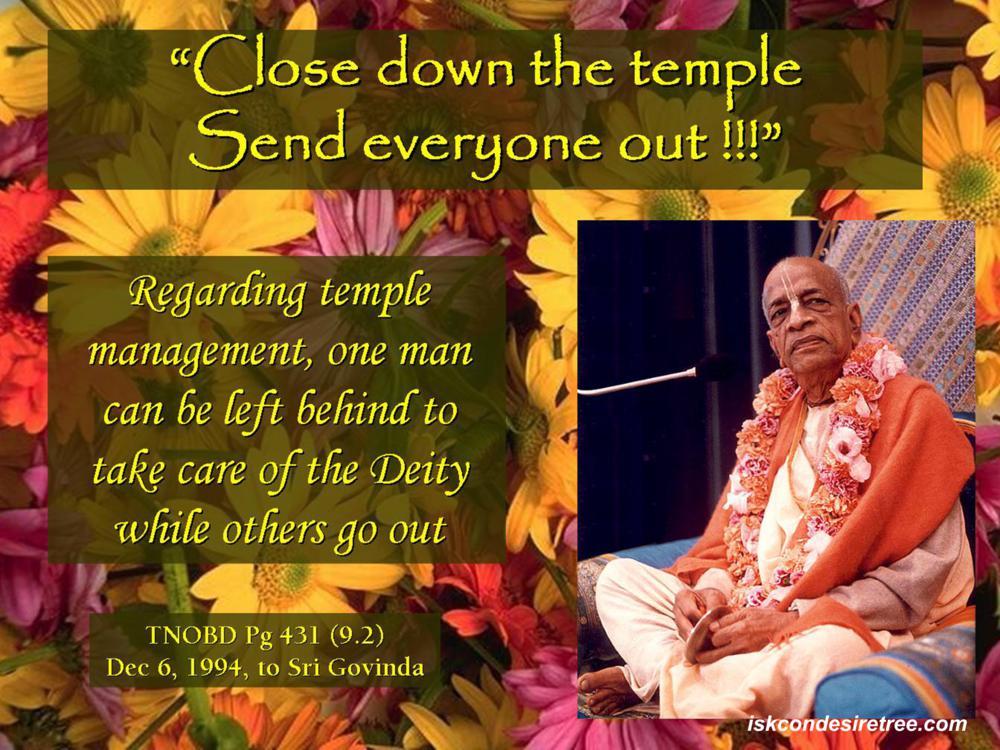 Golden Krsna ?Is this a speculation ?

Golden Krsna ?Is this a speculation ?
We know Krsna is not golden why then does some devotees make paintings with Krsna as Golden?
Sometimes Krsna becomes Golden for example one time He was waiting for Srimati Radharani under a tamarind tree in Vrindavana Imlitala ,so in separation from Sri Radha He became golden but it is an exception so it is quite wrong making such paintings. Another exception is found in Govinda lilamrta where Radha took the form of Krsna for some minutes and…

Ghatokacha
On 14th day of Mahabharata war ,Arjuna killed Jaidratha and the Kauravas kept fighting at night .Braking all rules of war they had already done so when they killing Abhimanyu ,even Drona though a socalled Brahmin was part of killed Abhimanyu in a deceitfull way fighting him from all sides because he had injured them all badly and when he was unarmed just with a chariot wheel to defend himself they killed him.Bhismadeva cried when he heard how irreligious the Kauravas had…

You can not catch Krsna first because I will catch Him first!

Miniketana Rama das my student translated the disapperance lila from Russian into English from Garga Samhita, Kusakratha Prabhu did not translated 7, 9 and 10 canto so I have asked Miniketana Rama Prabhu to translated in summary for now and later he will translate sloka by sloka, in this way what Kusakratha started will become completed .Kusakratha Prabhu was a dear friend and goduncle so I know he will be very happy when he sees we have completed 7 and 9 and 10 Canto of Garga Samhita…

Srila Prabhupada and the Jews

Srila Prabhupada about the Jews
Conversation During Massage, January 23, 1977, Bhuvanesvara
Ramesvara: It’s also commonly known that in the West the banks supplied money to Lenin to fight his revolution. They have no discrimination. If it seems like it is a good chance for making interest…
Prabhupada: Therefore Hitler killed these Jews. They were financing against Germany. Otherwise he had no enmity with the Jews.
Hari-sauri: Yes. They were controlling the economy. That was…

BV Santa Maharaja is a fraud

When he was Mahamantra das he always collected for Food for life and never did any.He pulled a knife on me at ISKCON Potomac due to his sinful nature...and later he stole 360 dollars from me at ISKCON New Orleans
He is a total demon ,please stay away from him ,he will never become a real devotee, his taking sannyasa is simply to fool people

Bhavananda Raya is the incarnation of King Pandu

Bhavananda Raya is the incarnation of

Sri Bhavananda Raya dedicated himself and his entire family of five sons (Ramananda Raya, Gopinatha, Vaninatha, Kalanidhi, Sudhanidhi) to the lotus feet of Sri Chaitanya Mahaprabhu. Once the Lord happily embraced him saying, "Bhavananda, you are Pandu. And your five sons are the five Pandavas. I consider your sons to be like My relatives. These five brothers are all My eternal servants life after life."

vṛndāvanāvani-pate jaya soma-soma-
maule sanandana-sanātana-nāradeḍya
gopīśvara vraja-vilāsi-yugāṅghri-padme
prītiṁ prayaccha nitarāṁ nirupadhikāṁ me
O protector of Vṛndāvana, all glories to you! O husband of Pārvatī, O you whose head is decorated with the moon and who is worshiped by sages like Sanaka, Sanandana, Sanātana, and Nārada! O Gopīśvara, I pray that you bestow upon me uninterrupted, unalloyed love for the lotus feet of the divine couple, who enjoy pastimes in…