Please accept my humble obaisences
All glories to Srila Prabhupada
Srila Narayana Gosvami Maharaja was born in a village named Tewaripur located near the bank of the sacred Ganges river in Bihar, India. The area was renowned for being the place where Lord Ramacandra and Visvamitra Muni came and killed the Taraka demon. He was born on the Amavasya (new moon) day of February 16th, 1921, into a very religious Trivedi brahmana family. Throughout his childhood he had many opportunities to regularly accompany his father when he would go to attend kirtana and pravachan assemblies.
Srila Gurudeva  joined Gaudiya math in 1946 and met his Gurudeva Srila Bhakti Prajana Kesava Maharaja a disciple of Srila Bhaktisiddhanta Prabhupada had preached to him ,Srila Narottamananda Brahmacari,and brought him to Gaudiya math in Navadvipa and later he attended the Navadvipa mandal Parikrama in 1947 and Srila Bhaktiprajana Kesava Maharaja initiated him with harinama and Brahmin diksa. He also gave him a title  Bhakta-bandhava, which means "friend of the devotees," because he was always serving all of the Vaisnavas in a very pleasing manner.Later Srila Gurudeva met many disciples of Srila Bhaktisiddhanta Prabhupada including our Srila Prabhupada, Srila Sridhara Maharaja, Srila Bhakti Pramod Puri Maharaja and he would serve them with rapt attention .He travelled with his Gurudeva Srila Bhaktiprajana Kesava Maharaja preaching in many places and in 1952 he was given Sannyasa and in 1954.  Srila Bhaktiprajnana Kesava Maharaja  made him in charge of the newly opened temple in Mathura ,Kesvaji Gaudiya Math .Srila Prabhupada came from Jhansi to Mathura in 1953 and also met Srila Bhakti Prajana Kesava Maharaja as explained in the Srila Prabhupada Lilamrta:
https://old.prabhupadavani.org/main/Srila_Prabhupada-lilamrta/PDF/SPL07.pdf
"Srila Bhaktiprajnana Kesava Maharaja was willing to assist Srila Prabhupada and went with him to Jhansi : From the Prabhupada lilamrta : Abhay took the short Tonga  ride back to Mathurä to see another Godbrother, Kesava Mahäräja. Kesava Mahäräja was in Mathurä with a group of his disciples to establish a center, but he had not yet located a suitable place. So when Abhay told him about the buildings in Jhansi, he was interested. Abhay and Keçava Mahäräja composed a letter to Mr. Bhayal presenting their requests and the aims of their movement and then traveled to Jhansi in a group-Abhay and Keçava Mahäräja with his disciples. Kesava Mahäräja and his party stayed for several days in Jhansi, holding kértanas and lectures. They had an appointment with Reva Sankar Bhayal, but Mr. Bhayal broke it, so they had to wait to see him on another day. Meanwhile, Keçava Mahäräja had time to form an opinion of Jhansi and discuss with Abhay the likelihood of making this his head quarters. He noted that the people were receptive but that the location was too remote. Even before meeting with Mr. Bhayal, Keçava Mahäräja felt reluctant to stake his whole mission in Jhansi. Abhay agreed, aware that Çréla Bhaktisiddhänta Sarasvaté had said that a preacher should go into the big cities and not 26 practice his bhajana in seclusion, and he admitted that after two years in Jhansi he had made no full-time followers. When they finally met with Mr. Bhayal, Mr. Bhayal failed
Abhay remembered how the Gaudiya Math preachers had expended their energy for years in the courts. Having terminated his long entanglement with family and business, he had no taste for a legal fight. He could have fought, but he remembered what Keçava Mahäräja had said about Jhansi's being out of the way. Of course, the whole thing had just sprung up here; otherwise Abhay would never have chosen to establish his worldwide League in such an obscure place. The educated young men and women wished him well, just as they had good wishes for the ladies' league, the Theosophy Society, the Arya Samaj, and many other causes. But their good intentions were certainly short of pure surrender and devotion: even his one disciple could offer him only part-time help. But these considerations had not been sufficient to force him out. The real thing was that he was being driven out.....
he moved on to Mathurä, carrying with him the Deity of Lord Caitanya."
Srila Prabhupada asked Srila Bhaktiprajana Kesava Maharaja to kindly install Lord Caitanya Mahaprabhu at Kesvaji Gaudiya Math and Mahaprabhu is worshipped to this day in Mathura . 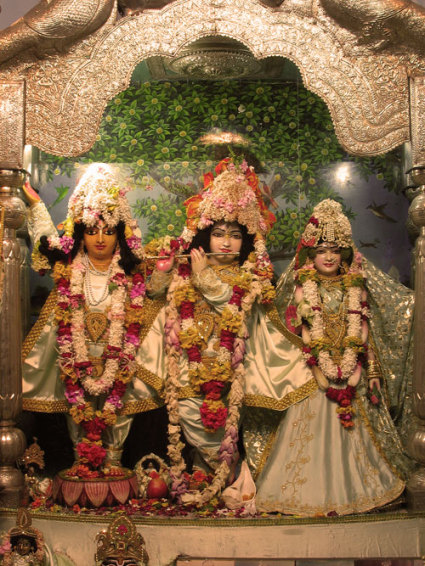 Later Abhaya Caranaravinda Prabhu wrote another dramatic article — this time about some of the leaders in the Gaudiya Matha. The article explained how the institution was coming apart after Srila [Bhaktisiddhanta] Prabhupada's departure. Grihasthas were giving up their wives and loving others' wives, and in the name of developing the mission, some were putting all the money collected into their own pockets. Sannyasis, even those who had been with their Prabhupada, were making buildings and sending all the money to their sons in their former homes to go to high school and university, or to go to England and America to study law and other things. He wrote about this situation and the first part was published in our Bhagavata-patrika and Gaudiya-patrika. At once a big storm broke out in the whole Gaudiya Mission. Although only about three pages were printed, letters began to come from many Gaudiya Mathas.

"It was like a revolution. Our guru maharaja and Abhaya Caranaravinda Prabhu were talking and smiling very secretly together. Prabhu said, ‘We should publish more of it. Why not?' Guru Maharaja was also in favor of publishing it. However many of the godbrothers exclaimed, ‘Oh, Kesava Maharaja, what are you doing, printing this? Then everyone will know and will criticize the Gaudiya Matha. These are our private family matters.' Even Pujyapada Srila Sridhara Maharaja, who was highly respected by all, was consulted. Many godbrothers came to Mathura at that time and Abhaya Caranaravinda Prabhu was residing here in our matha. Srila Tirtha Maharaja andother devotees asked, ‘What are you going to do? If you print this then our present institution will be smashed.' Guru Maharaja and Abhaya Caranaravinda Prabhu were smiling and asking each other, ‘Oh, what to do?' But when requested by so many godbrothers they decided, ‘Later on we may publish the articles, but for now we should obey their orders.'
So this has to be known. My long time friend and goduncle Bhakti Vikas Swami requested I take reinitiation from him giving up the diksa of my Gurudeva, I wrote him Maharaja do you chant 64 rounds every day?And you ask me to give up diksa from my Diksa Guru? So then He stopped talking to me .and communicating  with me treating me like I am his enemy .
I met Srila Narayana Maharaja in 1986 when I was serving in ISKCON  Krsna Balarama temple ,the TP Damodara Pandit Prabhu has asked I go to Mathura and collect laxmi from shopkeepers that where lifemembers and they would have their shops in a Janmastami souvenir printed by the temple and distributed free to thousands of guests and lifemembers around ISKCON Vrindavana. He said you can stay in in Kesavaji Gaudiya math .I was surprised, Gaudiya math ? Because I was trained in ISKCON Gaudiya math are all the bad guys and all demons and in maya.Of course this was not true, and Srila Narayana Maharaja was very close to ISKCON Vrindavana. I would attend their morning programs and chant my japa and do my worship of Govardhana sila and Salagrama sila. The devotees of Kesvaji Gaudiya math was so happy to see a western devotee worship Giriraja and Salagrama sila.I would go for classes in hindi with Srila Narayana Maharaja and he knew I spoke no hindi at all .He smiled and translated for me though there was around 40 devotees of more listening to his preaching.He one day told why Laxmidevi could not enter the Rasa lila and told me so many details I never knew of ,I was so happy to hear such sweet Krsna katha and I grew so fond of Maharaja and would pay full obaisences to him every time I  saw him. He took me into his room and gave me many good instructiones ,he also advised me to never stop chanting Hare Krsna ,he said 16 rounds daily is good but try to do 64 rounds , you are a brahmacari it will be the best for you .
In 1989 I recall a paticular meeting I had with Srila Narayana maharaja and after that I was thinking I wish I had been so fortunate to have been given diksa by srila Narayana Maharaja. He shared so many things with me .Later I shared those things with Dhanudhara Swami and he then started to go regularly to Srila Narayana Maharaja and brought t with him Bhurijana and Tamal Krsna Maharaja and others.The rest is history .
I recall in 1991 or so I advised that Jadurani sometimes seems so lost , that was a letter I send to Tamal Krsna Maharaja , you all should please bring her along .She really took to Srila Gurudeva. I had told Parantapa , and Govinda Bhakta Prabhus about Srila Narayana Maharaja from as early as 1993-94 , after Srila Gaura Govinda Maharaja left this word they stated to go and later took Sannysa from Srila Gurudeva. in 1996 when Srila Gurudeva came to the UK so many of these devotees that felt without shelter took shelter of Srila Gurudeva that also includs Jnana das prabhu ,that later became Nemi Maharaja .After the fall of Harikesa in 1998 I went to see Srila Narayana Maharaja in Virginia and I had been bitter because thee socalled Gopi bhava club headed by TKG and others had tried to push me away from Srila Narayana Maharajas association .Srila Gurudeva gave me reinitiation : http://www.youtube.com/watch?v=t8UYc2VhlbM This is from this time.
Srila Gurudeva told me to chant 64 rounds daily and gave me a sweet commentary to the Kama and Gopal Gayatri mantras ,.  I have been very fortunate to have been given diksa by an uttama adhikari .I later wrote an article that same year in glorification of Krsnas flute based on some of the inspiration I got from Srila Gurudeva when he gave me the gayatri mantra ,he loved it very much he told me.http://nimaipandit.ning.com/profiles/blog/show?id=4087284%3ABlogPos...
in 2001 when we had a festival for him in Virgina with a 1000 devotees he asked me to take sannyasa my son was 3 years old , I said I am ready Srila Gurudeva but my son is 3 years old is it proper for me to leave my small son and wife without protection ? He said you are very mature to be responsible, but remember Srila Sukadeva Gowami left everything at the time of his birth and simply walked away He allowed me to remain in grhastha life and told me to be   detached  just as Srila Sukadeva Goswami .He was such an exalted vaisnava and I always think of him with devotion and miss him .
your humble servant \\
Paramananda das