Inhouse fighting used by the Ritviks in Campaign against the GBC

Inhouse fighting used by the Ritviks in Campaign against the GBC

I want to comment on this as devotees pointed out this Rivik propaganda spread, HH Jayapataka Maharaja has served many years in Mayapure and how can you not give him credit
for his many years of service to Srila Prabhupada, I have met HH Jayapataka Swami in the past and he was very kind to me one time I had cellulitis in my leg when I was in ISKCON New Orleans, Maharaja send one disciple to take me to the doctor I know he is a kind devotee, Sivarama Swami I know from when I served in ISKCON UK as Temple commander and Sankirtana leader for ISKCON Soho I never has any problems with Maharaja I always found him straight forward, when I was Sankritana leader in Ireland, Tribuvanath made politics against me because he wanted to use Sankirtana money for his own preaching, but Sivarama Swami wanted me to stay on as Sankirtana leader for all of Ireland, I ended up leaving due to politics, I found Sivarama Swami was very fair to me ,so not sure what this internal dispute is about, I would not worry about it .I did hear something about Bhakti Tirtha Swami state Lav and Kush, the sons of Lord Ramachandra were in Africa, which might also be true, of course even if that part of the world was under the rule of India for some time, Africa was never ruling the world, I never read Bhakti Tirtha Maharaja books, I really have no interest but as a person, I have very good experience with Bhakti Tirtha Swami ,I once gave him Narasimha Kavacha spoken by Lord Brahma he thanked me a lot and told me he would chant it daily .Bhakti Vikas Swami is a very strict orthodox sannyasi ,though I at times have disagreed with him, he went after the Gopi Bhava club that promoted talking to much about the Gopis, that Srila Prabhupada was opposed too .He is against female leadership in ISKCON also Srila Prabhupada's clear instruction..so if Bhakti Tirtha wrote something about the planet of MU then I am sure Bhakti Vikas Swami would tear him apart. Hrdayananda Maharaja preaching is unorthodox, he plays ping pong, does not wear Neckbeads and tilaka and devotional clothing,he initiates persons that are homosexual and active in this lifestyle, so no wonder Danavir Maharaja who is also a strict sannyasi has said something,I hope this helps clear up some of the confusion .I have heard allegations about Japataka Maharaja not chanting his 16 rounds, that had been rumored for year for what saw in ISKCON New Orleans in the 2000th was that Maharaja and many of his disciples do not regularly chant 16 rounds.In ISKCON Dubai I saw a lot of business-minded mentality among the ISKCON managers,Sri Vallabha Prabhu who I consider a nice devotee , I highly doubt he chants 16 rounds he has Govardhana sila in his apartment that received no daily worship just sit there as decoration this is an offense,many other leaders in ISKCON keeps Govardhana Silas for show and do not regularly worship them.I saw in South Africa , Nanda Kumara also having Giriraja Silas he did not worship and he eventually fell down from Bhakti .I hope this helps clear up some of the things mentioned here, we live in a world with different personalities . Obviously everyone is on a certain level of spiritual advancement,I also know Hrdayananda Maharaja for many years, but I have heard from many of his disciples and devotees that has aspired to be his disciple until they found out he is not chanting 16 rounds daily and not even daily putting on tilaka and has neck beads . Whatever I have spoken is my observation and a personal opinion, I might be wrong on something if that is so let me know, but this is the truth as I have seen it , in light of this I am sharing these inhouse fighting.I do find it strange that pedophiles like Bhavananda and Satadhanya live in Mayapure under the protection of Jayapataka Swami I do not agree with that .I will mention that in 1990 Hrdayanada Maharaja defended Prabhupadacarya das who had been asked to leave ISKCON LA because he and other Brahmacaries were told my one store owner that some ISKCON devotees were buying condoms he was surprised as he thought that Hare Krsna's live in celibacy and do not even use birth control, Sura das gripped Prabhupadacarya against the throat and kicked him out of ISKCON LA, I had defended the TP having BMW in Bhagavatam class because so many devotees where gossiping about it , and Svavasa Prabhu was embarrassed, I was not concerned he drove a BMW, so many ISKCON leaders are into using ISKCON money to have a fancy car , well Srila Prabhupada did not like it ,, but what to do many ISKCON leaders are addicted to money and power and fancy cars and comfort, I never did any sports when I lived in the temple but when I moved outside in 1997 I started doing some sports as my health was deteriorating after many years of Sankirtana .I do not have problems with Hrdayananda Maharajas playing ping pong though it is obviously not what a sannyasi should be doing , some other disciples of Hrdyananda Maharaja play soccer and what not volleyball, there is pictures of Bhanu Swami lifting weights and he never ever wears Gopichandan tilaka also as if he and Hrdayanada are averse to wearing Gopichandan it is very undevotional but the GBC says nothing.Also Bhanu Swami told SriVallabha in Dubai it is ok for devotees to take grains on Nityananda Tratodasi which is a serious offense so he might write devotional books I am not impressed

the Ritviks are having a field day with inhouse fighting in ISKCON: 1) Guru Sivarama Swami attacks Guru Jayapataka Swami
"(Jayapataka Swami) is a sick person…obsessed…makes lying or duplicitous behaviour fully reconcilable with service to Prabhupada."
(HH Sivarama Swami, quoted in BTP 5)
2) Guru Bhakti Vikash Swami attacks Guru Bhakti Tirtha Swami
"BTS (Bhakti Tirtha Swami) has a history of talking and publishing imaginative nonsense that disqualifies him from being an acarya. He should talk according to guru sadhu and sastra or take a mothership and fly off to another dimension. This nonsense must stop. It is simply cheating. […]
Many devotees around the world are being spiritually murdered by believing BTS's bizarre assertations (in his widely distributed book Spiritual Warrior I), for instance about "motherships" coming from "the fallen continents of Atlantis and Mu"; Skull and Bones society controlling the world by conducting human sacrifices; that the world was formerly ruled from Africa (not, as sastra and Srila Prabhupada state, from India), etc."
(Bhakti Vikash Swami, August 19th and 23rd, 2003)
3) Guru Bhakti Tirtha Swami attacks Guru Bhakti Vikash Swami
"HH Bhakti Vikasa Maharaj is weakening the faith of devotees in the structure Srila Prabhupada has set up. Maharaj last year sent in very offensive letters to the GBC saying that I was crazy and worst. They were very upset with his offensive tone…Few days ago here in CIS H.H. B.B. Govinda Maharaj explained to one EC Committee member of the GBC that Maharaj had told some of his devotees that he was not a bona fide Guru. The other day in Croatia one Sannyasi told a group of us how Maharaj made attacking comments about HH Sacinandana Swami…The leaders in Croatia are writing a letter to the EC and to HH Bhakti Vikasa Swami with complaints about his visit to Croatia, his calling me a demon, his demanding to them not to let me initiate there for he was arranging for me to be rejected as a Guru…There are reports about his visit also to Slovenia, where he tells devotees in the darshan to accept him as he is a bona fide Guru and not me. Imagine I am even the GBC of Croatia so I have obviously gone out of my way to try to tolerate Maharaj's non vaisnava behavior, but he practically destroyed the whole festival in croatia and the leaders and Sacinandana Swami wanted to let him know how disturbed they are."
(Bhakti Tirtha Swami Letter, September 1st, 2003)
4) Guru Danavir Goswami attacks Guru Hridayananda Das Goswami
Danavir Goswami's views on Hridayananda Das Goswami's paper The Moral Thesis, 2005:
"How lamentable it is that "Vaisnavas" are joining the group of mundane scholars who oppose the pure devotee's writings because, unbeknownst to them, the subject matter is transcendental to their understanding. […]
A good friend of mine wondered out loud whether to credit such ludicrous statements to poor research, inanity, intelligence stolen by illusion (mayaya-pahrta-jnana) and/or an attempt to beguile. […]
The Moral Thesis has not accurately understood these (Krishna's) pastimes. […] disobeying the instructions of the founder-acarya in the guise of magnanimity.
[…] ISKCON accepts its founder-acarya as a prominent mahajana and agrees to follow his conclusions without wrangling new interpretations to suit the current social trends-but The Moral Thesis dares to differ. […]
Yet, moral reasoning which contradicts scripture and guru and sadhu is useless […] Those who wander off into the realm of mundane wrangling and speculation (mano dharma) forgetting the simplicity of accepting the words of the spiritual master as one's life and soul also lose their status as advanced devotees."
to all of you that read Ritvik stuff, these internal fights are all over their network to try to weaken ISKCON ..DO NOT LOOSE faith in Srila Prabhupada .

In service to Srila Prabhupada

and Hanuman das objecting to Hrdyaananda Maharaja being a GBC Entering the ping pong era – Lasting Impression
I would say why is Hrdayananda Maharaja not chanting 16 rounds not wearing tilaka and devotional clothing? How in the world does he get to be a GBC ? He does not even follow the basic things .Like Harikesa for year never attended Mangal artik , how can so-called leaders set such nonsense examples? 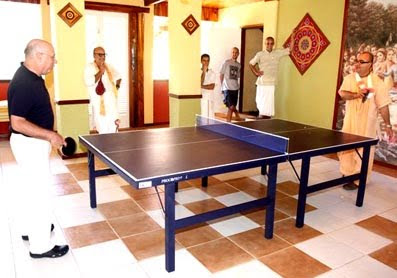