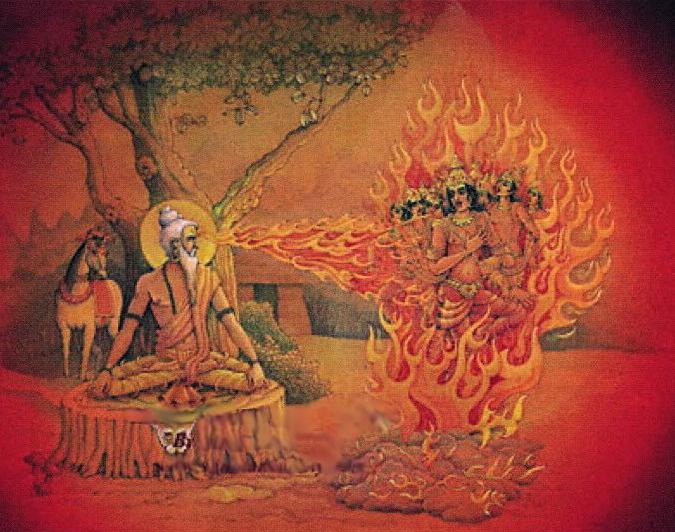 As you might recall from reading Srimad Bhagavatam Lord Kapila was meditating and the sons of King Sagara attacked Lord Kapila thinking he had taken the Sacrificial horse, they were burned to ashes due to their offenses, Lord Narasimha can also burn anyone to ashes simply by His glance, Lord Kapila did not even have to look at them still they burned to ashes so King Bhagiratha finally managed to bring Ganga to Earth ,so were Ganga and the Ocean meets is a big Mela daily to honor how Ganga was brought by Bhagiratha and deliver the 60,000 sons of King Sagara Maharaja by the holy Ganges touching their ashes so they went back to Godhead simply by touching Ganges water

if you have never been to Ganga Sagara I would advise it I once went with a devotee Vaikuntanath Prabhu and it was worth the long journey from Calcutta by bus.

I found this by one devotee very nice compilations :

Books : Srimad-Bhagavatam : Canto 3: “The Status Quo” : SB 3.33: Activities of Kapila : SB 3.33.34 : PURPORT :
It is understood that Kapila Muni first went towards the Himalayas and traced the course of the River Ganges, and He again came to the delta of the Ganges at the sea now known as the Bay of Bengal. The ocean gave Him residence at a place still known as Gaṅgā-sāgara, where the River Ganges meets the sea. That place is called Gaṅgā-sāgara-tīrtha, and even today people gather there to offer respects to Kapiladeva, the original author of the Sāṅkhya system of philosophy. Unfortunately, this Sāṅkhya system has been misrepresented by an imposter who is also named Kapila, but that other system of philosophy does not tally with anything described in the Sāṅkhya of Kapila in the Śrīmad-Bhāgavatam,

“It is now the beginning of the month of Māgha. If we go to Prayāga at this time, we shall have an opportunity to bathe for a few days during Makara-saṅkrānti.”
PURPORT
Bathing during the month of Māgha at Māgha–melā still takes place. This has been a very old melā (assembly) from time immemorial. It is said that the Lord in the form of Mohinī took a bucket of nectar and kept it at Prayāga. Consequently Māgha–melā has been observed, and there is an assembly of holy men there every year. Every twelfth year there is a Kumbha–melā, a great festival, and all the holy men from all over India assemble there. The brāhmaṇa wanted to take advantage of the Māgha–melā and bathe there.
Bathing at the confluence of the Ganges and Yamunā near the fort at Allahabad, Prayāga, is mentioned in revealed scriptures:
māghe māsi gamiṣyanti
gaṅgā-yāmuna-saṅgamam
gavāṁ śata-sahasrasya
samyag dattaṁ ca yat-phalam
prayāge māgha-māse vai
tryahaṁ snātasya tat-phalam
“If one goes to Prayāga and bathes at the confluence of the Ganges and Yamunā in the month of Māgha, he attains the result of giving hundreds and thousands of cows in charity. Simply by bathing for three days there, he attains the results of such a pious activity.” Because of this, the Sanoḍiyā brāhmaṇa was very eager to go to Prayāga and bathe. Generally karmīs (fruitive laborers) take advantage of bathing there during the month of Māgha, thinking that they will be rewarded in the future. Those who are situated in devotional service do not very strictly follow this karma–kāṇḍīya process. Sri Caitanya-caritamrta – 1975 Edition : Cc. Madhya-lila : Madhya 18: Lord Sri Caitanya Mahaprabhu’s Visit to Sri Vrndavana : Madhya 18.145
ectures : Srimad-Bhagavatam Lectures : Canto 3: Lectures : SB 3.26: Lectures : Srimad-Bhagavatam 3.26.4 — Bombay, December 16, 1974 : 741216SB.BOM : Arcye viṣṇau śilā-dhīr guruṣu nara-matir vaiṣṇave jāti-buddhiḥ. These things are forbidden. You cannot… Arcye viṣṇau śilā-dhīḥ. Kṛṣṇa or Viṣṇu, the same thing—if you think that this mūrti is made of stone, śilā-dhīḥ, or Śālagrāma-śilā, if you think it is śilā or stone, this is nārakī-buddhiḥ. This is not recommended. It is… Don’t think. Arcye viṣṇau śilā-dhīr guruṣu nara-matiḥ. And those who are guru, spiritual master, Vaiṣṇava, if you think of them that he is ordinary human being, that is forbidden. Gāṅga-jala or caraṇāmṛta, if you think ordinary water, that is forbidden. Vaiṣṇave jāti-buddhiḥ. Vaiṣṇava, who has become devotee of Kṛṣṇa, if you think that he belongs to this caste, he belongs to that caste, that is also forbidden. Nārakī-buddhiḥ. These things are nārakī-buddhiḥ. At least, those who do not know how Kṛṣṇa can be transcendental in all His features… Therefore we are forbidden, “Don’t take like that.” It is a fact that this Kṛṣṇa in this temple is the same origin Kṛṣṇa who is in the Vaikuṇṭha, but because we have no eyes to see, because we are not mature to see Kṛṣṇa, therefore we should accept this, I mean to say, negation, that “Don’t think like that.” Then we will be able to understand
Lectures : Srimad-Bhagavatam Lectures : Canto 5: Lectures : SB 5.5: Lectures : Srimad-Bhagavatam 5.5.3 — Vrndavana, October 25, 1976 : 761025SB.VRN :
So these mahātmās, tyāgīs. Generally, they are sannyāsīs. And so far other mahātmās also, it does not mean only the sannyāsī can be mahātmā. No. Gṛhasthas also can be mahātmā. How gṛhasthas can be mahātmās, that is explained in the next verse: ye vā mayīśe kṛta-sauhṛdārthā. His only business is to satisfy Kṛṣṇa. That is… Otherwise, here it is said, jāyātmaja-rātimatsu gṛheṣu. He has no interest in so-called family life, wife, children, friends, and nationality. No. Ye vā mayīśe kṛta-sauhṛdārthā. Only interest is how to please Kṛṣṇa. Such person, he is also mahātmā. Not that only the mahātmās who are renounced order. There are gṛhasthas also. Just like Advaita Ācārya, He was gṛhastha. He became very, very sorry that people are so much suffering. “It is not in My power to elevate them. Unless Kṛṣṇa personally comes, it is not possible.” Therefore He offered to Lord Viṣṇu Gaṅgā-jāl, tulasī, praying, “Please come. People are very much suffering. So if You come…” And on His request Kṛṣṇa came in the form of Caitanya Mahāprabhu. So it is not that a gṛhastha cannot be mahātmā. There are many mahātmās
Conversations : 1977 Conversations : January, 1977 : Evening Darsana — January 23, 1977, Bhuvanesvara : 770123ed.bhu :
Prabhupāda: He started this rajya hope: “We must have our own in hand.”(?) So he was a very big man, barrister. One, his friend, he was also brāhmaṇa. So he felt it, and he was taking daily Gaṇgā-snāna. So this, his friend, Mr. Bannerjee, he came to see him, that “You bring one doctor.” He refused: “No, I don’t want. I’ll drink this Ganges water.” So he never took any help from the brāhmaṇas. But simply drinking Ganges water cured. And in the Śrīmad-Bhāgavatam also it is stated, nārtasya cāgadam udanvati majjato nauḥ, tāvad vibho tanu-bhrtāṁ tvad-upekṣitānām [SB 7.9.19]. A doctor medicine is not actually cure. Unless…. If somebody is neglected, denounced by the Supreme Personality of Godhead, any amount of medicine or good physician will not be able to cure. Father, mother, is not the shelter of the children. The things are described in the Bhāgavatam.
Conversations : 1976 Conversations : July, 1976 : Evening Darsana — July 8, 1976, Washington, D.C. : 760708ed.wdc :
Prabhupāda: In this country or that country, there is no such distinction. This patraṁ puṣpaṁ phalaṁ toyam, any country you can get it. You cannot say in America there is no patraṁ puṣpaṁ phalaṁ toyam, in India only. No. Everywhere it is available. Therefore this general prescription is there. Even Kṛṣṇa does not say Gaṅgā-jala. Because Gaṅgā, if you say Gaṅgā-jala, that is available in India. He says toyam, any jala, any water. Because any water, as soon as touches the lotus feet of Kṛṣṇa, it becomes Gaṅgā. Why Gaṅgā is so adored? Because it is coming from the toes of Kṛṣṇa. So any water touching Kṛṣṇa’s toes, that becomes Gaṅgā.